View the revised health check-in procedure in the Phase 2.5 for College Operations starting Monday, Sept. 21.
All individuals are required to wear masks at all times on campus. See What to Expect When Returning to Campus.
View Coronavirus Response information and COVID-19 case reports. View campus hours. 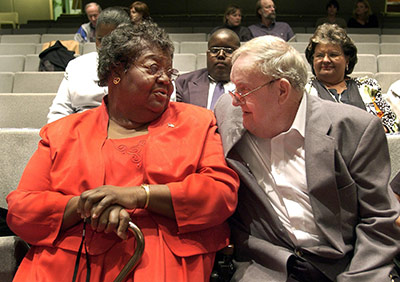 An Unlikely Friendship chronicles a surprising friendship that emerged between an embittered Ku Klux Klan leader and an outspoken black activist. Told in their own words, this rich and compelling story is as sincere as the protagonists themselves. In the early 1970s, Ann Atwater, a poor welfare mother, and C.P. Ellis, the Exalted Grand Cyclops of the Durham (North Carolina) Ku Klux Klan, were on opposing sides of the debate over public school integration. Initially, their relationship was fraught with distrust and hatred. Yet in working together and understanding one another, they formed a deep and loving friendship that continues to this day.

Filmmaker Dr‎. ‎Diane ‎Bloom will facilitate a discussion after the film‎. ‎This event is part of Durham Reads Together‎, ‎a community reads project in support of the book Best of Enemies by Osha Gray Davidson.

Sponsored by Viva the Arts and  the SGA.