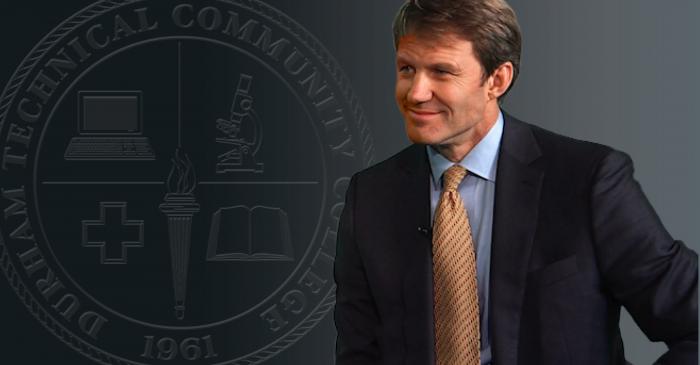 John B. Buxton, a longtime leader of public education in North Carolina and a champion of providing educational opportunities to all students, has been named the fifth president of Durham Technical Community College.

The appointment of Buxton following a nationwide search was approved Friday by the North Carolina Board of Community Colleges. Buxton, who goes by J.B., succeeds William “Bill” Ingram, who announced his plans to step down on June 30 after 12 years as Durham Tech’s chief executive. Buxton is expected to start in mid-July.

Durham Tech, part of the North Carolina Community College system, has helped provide a versatile workforce for the Research Triangle region since 1961. The school currently serves more than 18,000 students at seven locations in Durham and Orange counties and online.

In an email sent to the Durham Tech community Friday, John F. Burness, the chair of Durham Tech’s board of trustees, said the board and the Presidential Search Committee believe Buxton “possesses the qualities of leadership, intellect, integrity, compassion and values appropriate to this remarkable and challenging moment in Durham Tech’s and, indeed, our nation’s history.””

“J.B. cares deeply about people and educational excellence,” Burness’ email continued. “We were impressed by his creative and collaborative approach to leadership, his record of commitment to social justice and appreciation of the unique role Durham Tech must play in helping ensure all Durham and Orange County residents can access an educational and workforce training ecosystem that enables them to maximize their human potential and quality of life.”

He also has served as an adjunct assistant teaching professor in the public policy department at the University of North Carolina at Chapel Hill. He currently serves as an at-large member of the State Board of Education, where he works directly with the community college system on a range of education and workforce-related issues.

Buxton has worked closely with the state’s community colleges dating back to 2001 when, as senior education advisor to Gov. Mike Easley and later as deputy state superintendent of the N.C. Department of Public Instruction, he successfully led the effort to implement early college high schools across the state.

Buxton said community colleges in North Carolina “have long been drivers of individual opportunity and economic prosperity. That has certainly been the story of Durham Tech.

“He has the heart for students, student success and education,” said Scott Ralls, the president of Wake Technical Community College who has worked with Buxton on various projects over the past 15 years. “J.B. is one of the smartest, most strategic thinkers in education that I’ve known.”

“Community colleges tie together the other parts of education: the public schools and the universities,” Ralls added. “J.B. will bring a unique knowledge of how community colleges fit into the larger environment.”

Throughout his career, Buxton has acted on his belief that education is a powerful tool for providing opportunities to all students. While working as a senior education advisor in Gov. Easley’s office, Buxton either led or was directly involved in the state’s early college high school initiative for low-income and first-generation students, the state’s first Pre-K program for at-risk 4-year-olds, and a 100-school effort to support the health, mental health and social service needs of children and families. And while at the North Carolina Department of Public Instruction, he refocused the department on services to local districts and schools with a specific target on high-poverty, low-performing school districts.

Buxton also has served as a White House Fellow with the Domestic Policy Council under President Bill Clinton. His responsibilities included developing the president’s K-12 public education initiatives and advising on major educational issues and legislation.

Former longtime Durham Mayor William “Bill” Bell, a member of the Durham Tech presidential search committee, said Buxton “impressed all of us with his strategic vision and creativity at a time of great social change, his appreciation of collaborative educational and business partnerships and his lifelong passion to lift up the underserved through education. He will be a great addition to Durham and I am confident a worthy successor to President Bill Ingram.”

Bell added that participating on the search committee “has given me an even greater appreciation of Durham Tech's ability to have an outsized impact on our residents’ ability to access educational opportunity and the skills needed to obtain the growing number of good paying jobs being created and attracted to the Research Triangle.”

"I am excited to join an institution that values equity and inclusion, student success and innovation. As Durham and Orange counties confront the challenges of COVID-19, economic uncertainty and continuing racial discrimination, Durham Tech is positioned to be a force for progress."

Buxton, who began his career as a high school English teacher and coach in Massachusetts, is active in the local community, including serving on the Raleigh Planning Commission and on the board of North Carolina FC Youth, one of the nation’s largest youth soccer clubs.

Buxton also has experience working with the media, and is a regular writer of opinion articles. In 2009, he argued in an op-ed in the (Raleigh) News & Observer that community colleges should be the institutional lynchpin for the state’s educational and economic aspirations. “Adaptation and innovation are in their DNA,” he wrote. “… They have a workforce mission, a commitment to accessibility and an entrepreneurialism that makes them best equipped to lead innovative solutions at the state and, more importantly, local level.”

Durham Tech assistant dean and search committee member Micara Lewis-Sessoms said this is an exciting time for the college. “J.B. Buxton has the opportunity to support the great existing work which has situated Durham Tech at the nucleus of education and workforce training for Durham and Orange counties,” she said. “As we propel forward, we are excited to have a leader at the helm who possesses a shared passion for education and commitment to our mission.”

Buxton attended UNC-Chapel Hill on a Morehead Scholarship, where he graduated with a bachelor’s degree in English. He received his master’s degree in public affairs from the Woodrow Wilson School at Princeton University.

Buxton and his wife, Hunter, live in Raleigh. They have three children: Drake, a UNC-Chapel Hill graduate; Luke, a current UNC-Chapel Hill student; and Sadie, a student at North Carolina State University.

-- Founder and Principal, Education Innovations Group, Raleigh, 2009–present. Clients include the Gates and Wallace foundations, state departments of education, the U.S. Department of Education, and the Baltimore City Public Schools.

-- Member At-Large, N.C. State Board of Education, 2018–present. Appointed by Gov. Roy Cooper and confirmed in a joint session of the NC House and Senate. Serves as chair of the board’s Student Learning and Achievement Committee.

-- Legislative Director, N.C. State Board of Education, 2000–2001. Served as the board’s and agency’s liaison to Congress and the State Legislature.

-- Board of Directors, N.C. Center for the Advancement of Teaching Foundation, June 2019–present.